Ali and his family fled Afghanistan because of terrorism and violence and arrived in the United States in 2016. He now works at Marriott Hotel in Downtown Kansas City and is studying computer science at Johnson County Community College. Ali says that JVS helped him get where he is today. He says he hopes to repay JVS one day when he reaches his goals, which is what he is working towards. Ali’s favorite thing about Kansas City is that the life is nice and quiet. He stated that the beautiful city has lots of places to go and loves the weather. 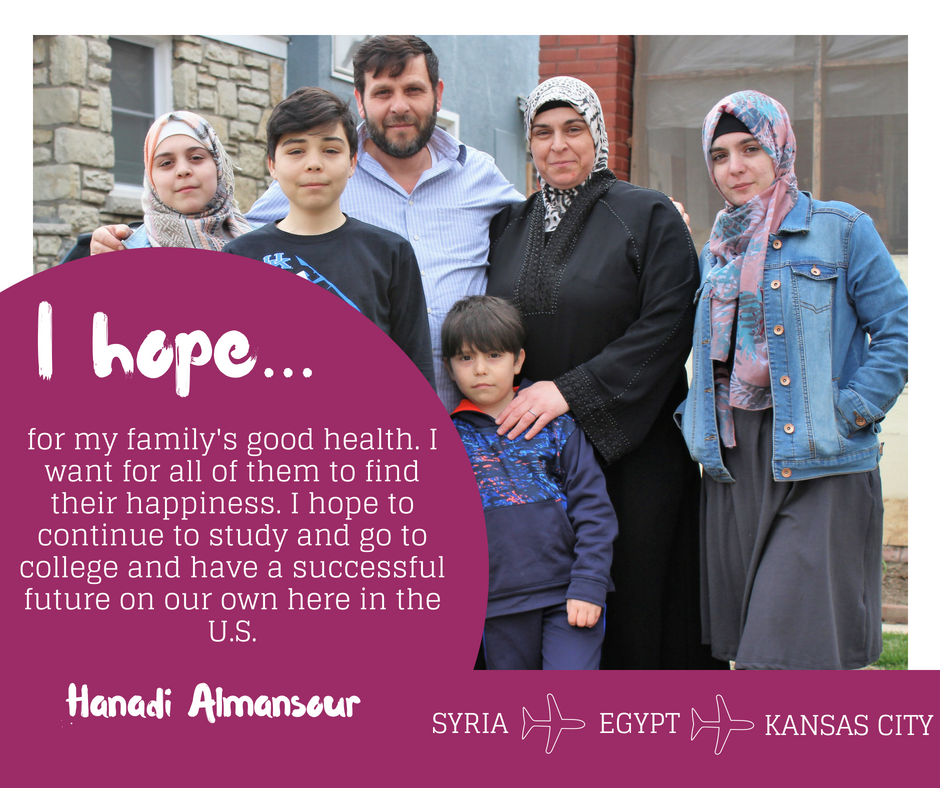 Hanadi and her family fled from Syria to Egypt because of war. After three years, they arrived in Kansas City in 2016. Her husband, Mohammed, works at Panera while Hanadi is a student in English as a Second Language. Hanadi says JVS has helped her and her family learn about the U.S. and all of the resources available to them. She said, “Life in the U.S. for the first year was like an exam. JVS helped us pass the test!” Hanadi loves their life in Kansas City and feels welcome and safe. She says that she can do anything as a Syrian woman. Her family loves to shop for clothing, visit with friends, go to the lake, and enjoy the Plaza.

Myat Myat and her family fled from Burma to Thailand in 2005 and arrived in the U.S. in 2013. She now works as a seamstress at Allied Material & Equipment Co. Myat Myat thanks JVS for helping her family with clothing, schooling and employment. She says it is unforgettable. Her favorite thing about Kansas City is the opportunities it has given her family. Her husband works at Children’s Mercy, her oldest works at 7-11, her middle child is attending college, and her youngest attends East High School. 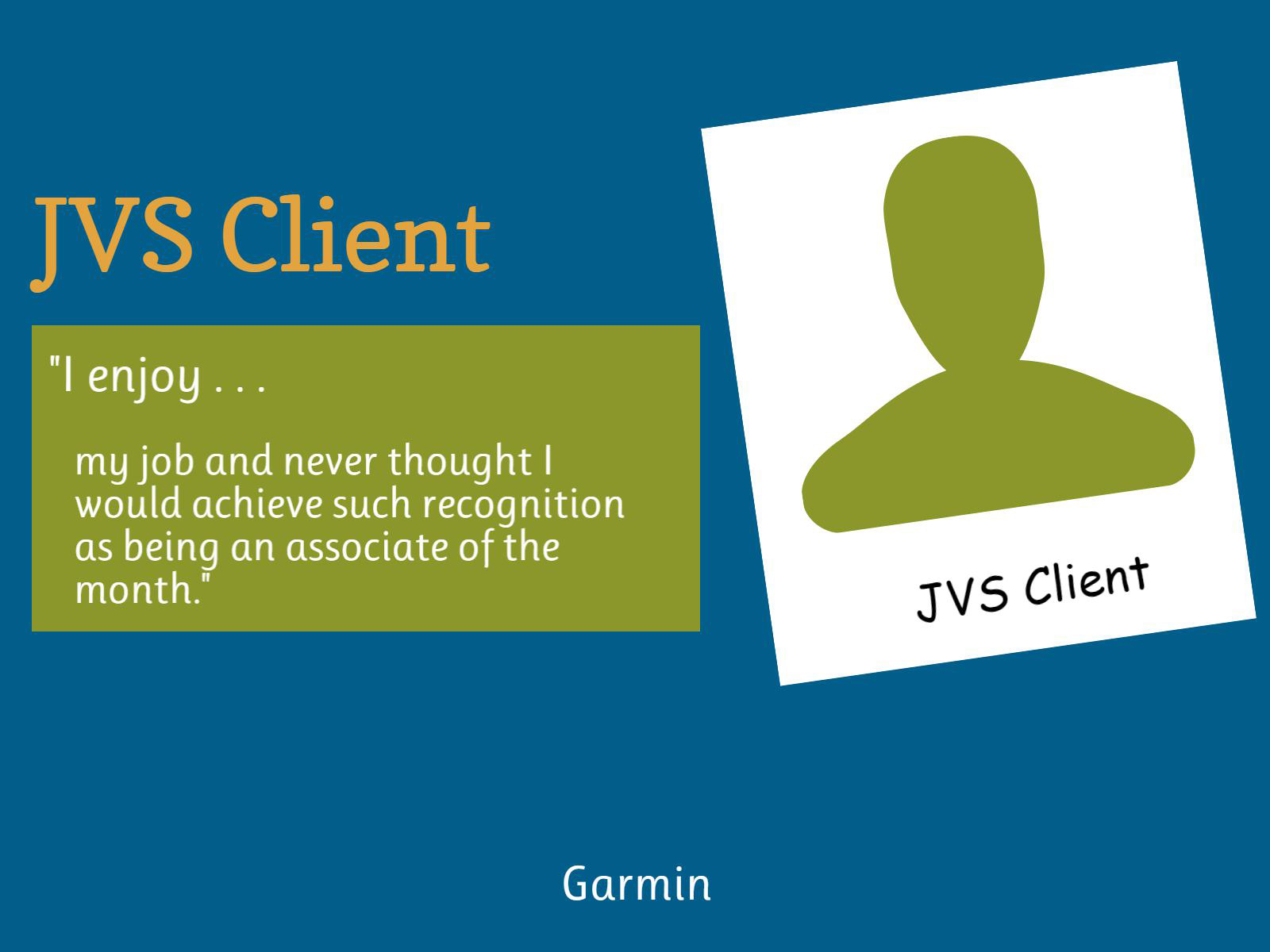 This Career Skills & Connections client reconnected with a JVS employee recently, thanking them for their help while they were seeking employment. It is because of JVS that I have been happily employed at Garmin for about a year and a half now. I will be associate of the month out of a campus of 3,000 employees, including engineers, software developers, product specialists and more. Being honored is an understatement, as I love my job and never thought they would achieve such recognition having been there less than two years. It is a huge honor and I wouldn’t have gotten here without JVS. JVS gave me the tools to work towards the life I wanted and I appreciate it every day. 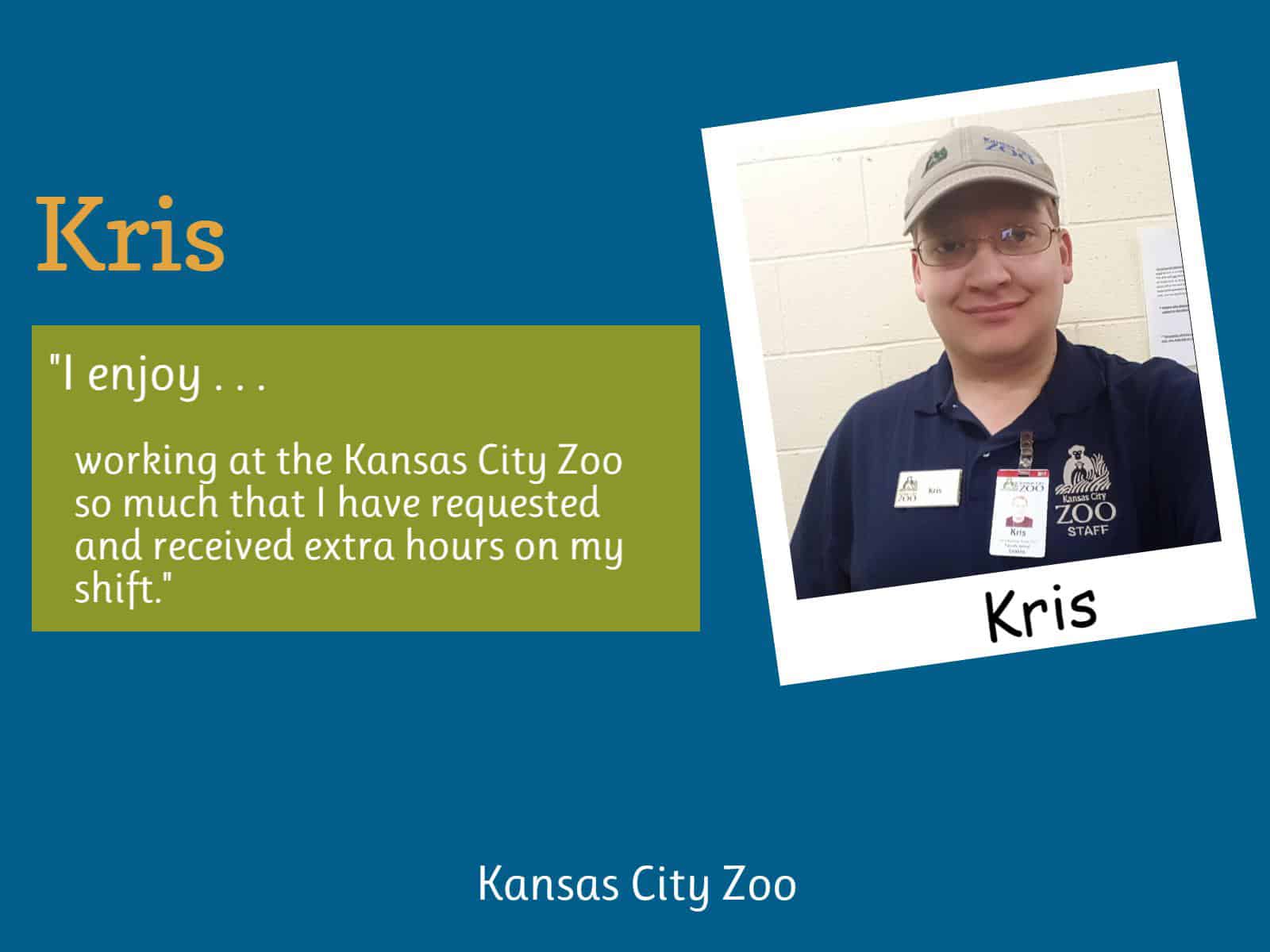 JVS client Kris, 27, had never worked a job before and was diagnosed with Autism. After a series of explorations and community job trials, he began applying for jobs. One day, Kris received a call from the Kansas City Zoo about an application he had put in for a part-time job. He then scheduled and attended an interview by himself. Kris is now coming up on 90 days of employment and has enjoyed the work so much that he requested and received extra hours on his shift. 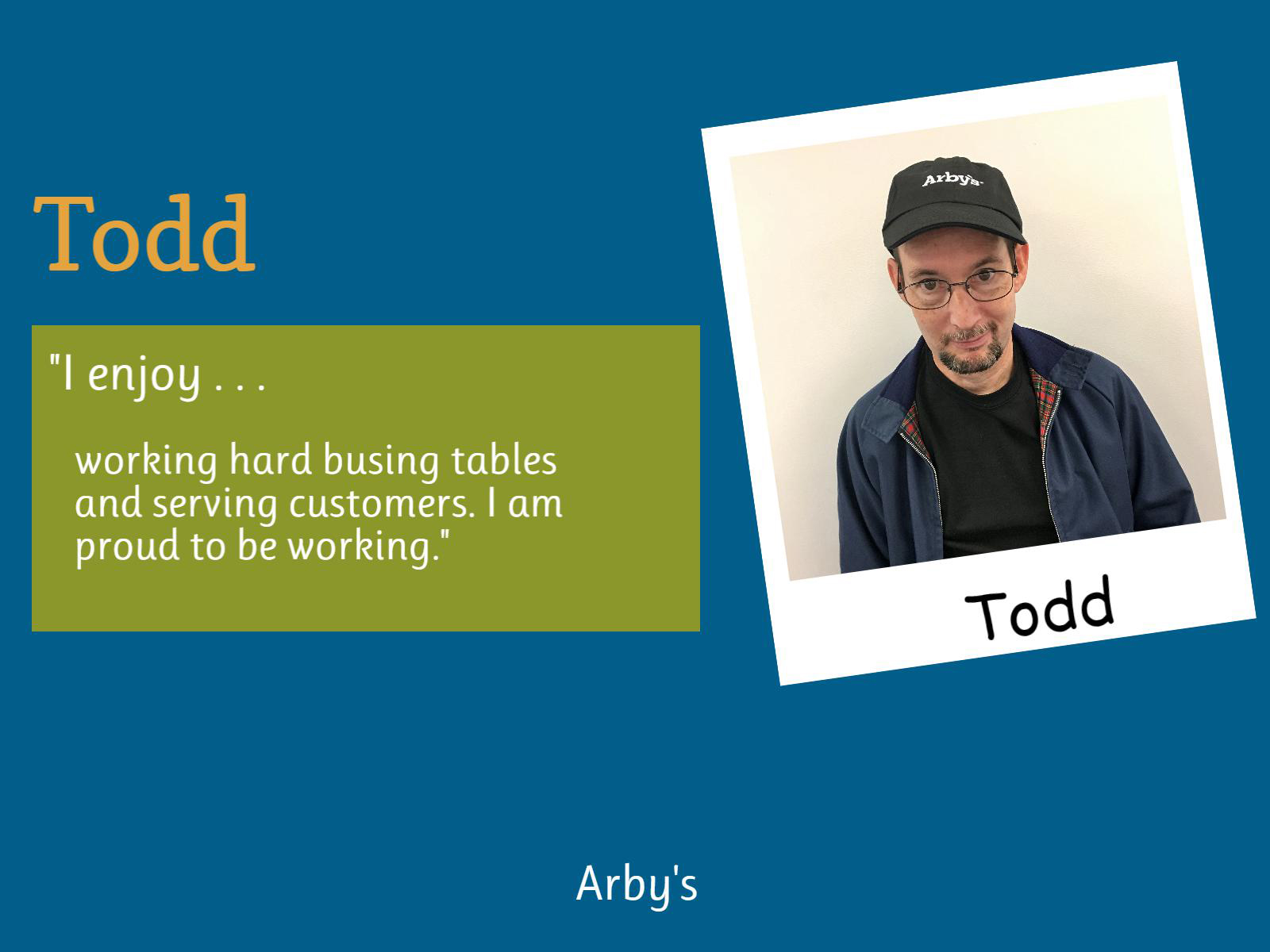 Todd worked at Citizens Memorial Hospital in Stockton, Missouri for over 25 years where he kept up with repairs and cleaning standards. He also volunteered with Relay for Life and received an award from the Optimist Club. Before Todd moved from Stockton, Missouri to Independence, Missouri, his sister called the Independence Full Employment office to see what services would be available to him when he arrived. Todd first came to the Full Employment Council office the beginning of March. He attended the Resume Workshop and was given job referrals on the bus line to accommodate his living and transportation arrangements. He was also given referrals to additional services. After creating his resume, Todd then dropped it off with over 10 employers. He soon heard back from Arby’s and is now working hard bussing tables and serving customers. With a new city to navigate, a new living situation to familiarize himself with, and a new public transportation system to learn, Todd is all smiles and is proud to be working after a quick transition to Independence.

Souleyman and his family fled from Sudan to Chad in 2003 to escape civil war. He now works Prier Products and Boomer Health and is studying at Johnson County Community College. Souleyman would like to go to law school and study international law to support others in need of help, like his family. Souleyman says that JVS has helped graduate high school in one year with a 3.5 GPA and get accepted to college. Souleyman’s favorite thing about Kansas City is the good people and neighbors. He says it is perfect because there is no violence, only peace and love.

Tin Tun and his family fled from Burma because of political turmoil and suffering. They arrived to the U.S. in 2015 and relocated to Kansas City a year later. After graduating from JVS Global Gardens Project, they moved to a program that teaches them how to be business owners. Tin Tun and his wife, Win War, are independently employed farmers and sell produce at the North East Farmers’ Market and City Market. Tin Tun thanks JVS for giving his family opportunities to prosper. Tin Tun’s favorite things about Kansas City are gardening and continuing to learn.
DONATE