Issue 1: To live up to America’s proud history as a place of refuge and a beacon of freedom, (1) restore annual refugee admission ceiling to at least 75,000, (2) preserve our commitment to family reunification, (3) treat asylum seekers humanely.

The United States is a country founded and built by immigrants and refugees. We are proud that America has long been a refuge for those seeking freedom, safety and new lives. 70.8 million people worldwide have been forcibly displaced from their homes. Those who have been forced to leave their home country to escape war, violence or persecution can register as refugees and begin the process of applying to be resettled in a third country like the United States. But less than 1% will get this chance to start a new life. Refugees are parents, artists, children, students, doctors, business owners, resilient human beings and more. Their lives have been interrupted, and they have lost much of what they know, love and need to survive and thrive.

JVS is advocating for the following actions: 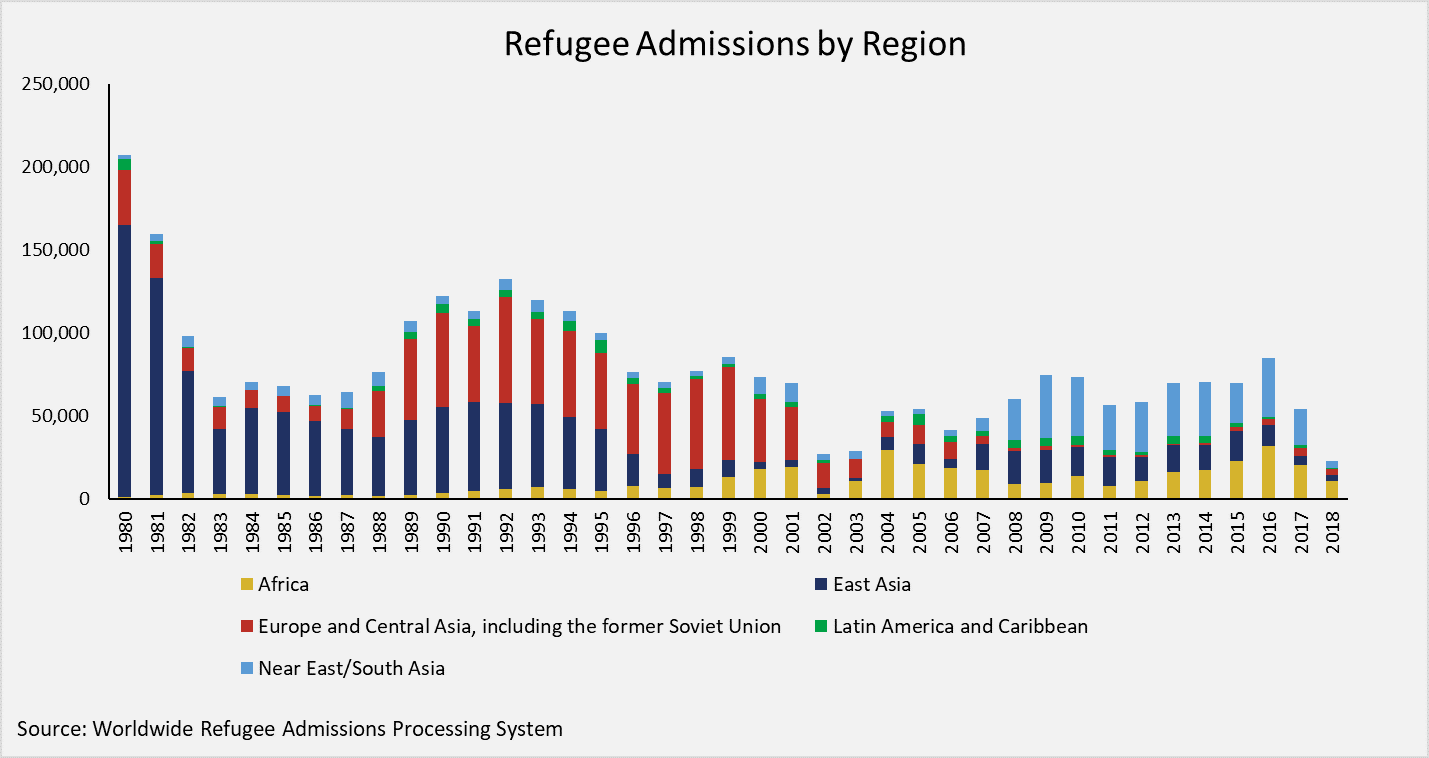 (2) Preserve our commitment to family reunification
Family immigration for immediate family members (child, spouse or parent) is the primary basis for legal immigration to the United States. Since 1965, family visas account for about 65% of legal immigration each year. JVS urges the continuation of family reunification as contributions of family-based immigrants account for a significant portion of domestic economic growth, contribute to the well-being of the current and future labor force, play a key role in business development and community improvement, and are among the most upwardly mobile segments of the labor force.

(3) Treat asylum seekers humanly
Migrants who come to our borders are often asylum-seekers or other vulnerable individuals. Asylum status and refugee status are terms often used interchangeably in immigration; the difference is where the person is located when making their application. JVS advocates on behalf of migrant and asylum-seeking men, women, and families impacted by immigration enforcement. We believe a person should never be locked up simply because of his or her immigration status. Instead, JVS promotes access to due process and champions cost-saving alternatives to detention programs that prevent family separation and guarantee compliance with immigration officials.

Immigrants from all over the globe—Italy, Mexico, Vietnam—have long made Kansas City their home. Welcoming put Kansas City on the map, as settlers migrating on the Oregon and Santa Fe Trails found it to be a place of sustenance and solace at the start of their long journeys.

JVS is working with community partners to help Kansas City become an official Welcoming Community by partnering with Welcoming America. Welcoming communities encourage people to get to know their neighbors, strengthen social ties, and help everyone feel respected and included. This can amplify the crime-reducing effects of immigration revealed through decades of research. We believe that all people, including immigrants, are valued contributors who are vital to the success of our communities and shared future.

On November 1, 2018, Kansas City Public School (KCPS) system was approved to award the state’s Seal of Biliteracy to qualified students. The Missouri Seal of Biliteracy is an award granted by a local system to recognize a student who has attained proficiency in English and one or more other world language(s) before high school graduation. The recognition of attaining biliteracy becomes a part of the high school transcript for these students and serves to certify attainment of biliteracy for the community, employers and universities.

Out of more than 500 school systems in the state, KCPS will now be one of about 40 that are qualified to award their high school graduates the Missouri Seal of Biliteracy. JVS will continue our partnership with KCPS to support students in this process and encourages more schools in the KC Metro to obtain the Missouri Seal of Biliteracy with the goal of attracting economic development, increasing postsecondary completion for students and supporting students and employers to thrive in a global economy.